Mt. Etna produced a beautiful display in the early morning, and the steam and ash cloud that rose up caught the morning sun before carrying the ash south and away from our neighborhood. The south-southwest side of the mountain is now covered in the black ash, covering -and probably melting- all of that slope’s snow. The ash carried as far as Sigonella, about 40 miles away. For hours this morning, we could step outside and get black snow in our hair, on our clothes and wedged into the soles of our shoes, but could not see it against the bright blue sky. Grazie, Etna.

Cinque – Eruption in five photos. The first two photos are courtesy of my colleague, Gene R and were taken in Trecastagni around 0530-0600. The next two were taken from our main level balcony between 0645 and 0700. The final photo was from the roof terrace at 0710. Enjoy.

Early morning splash of lava alongside the gently lit church. 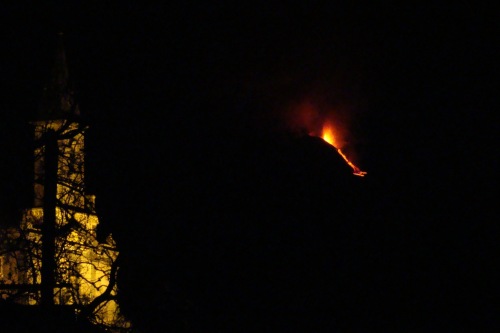 The eruption lasted for several hours and the lava comes in brilliant bursts of red and orange. 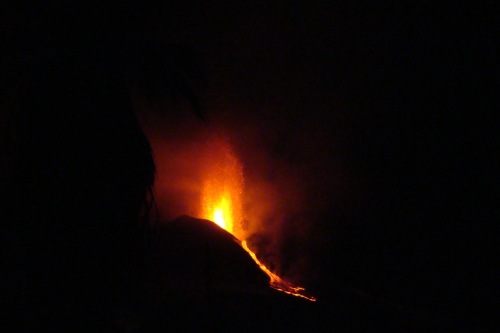 From our vantage point, we could see several intermediate eruptions blasting into the air above Etna. Look for the bright orange right at the base of the steam cloud tower.

As the eruptions died down, the pretty oranges and reds began appearing in the steam and ash cloud as the sun rose over the sea behind our home. 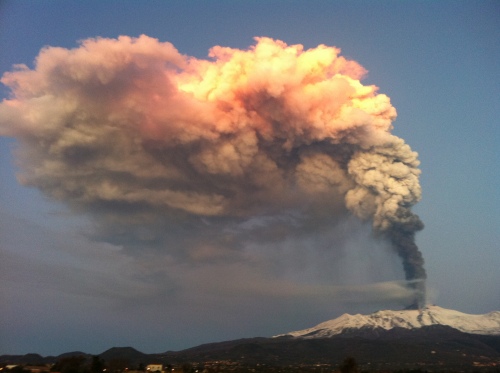 The sun came full up and emphasized the ash-steam divide in the rising cloud. Shadows and light played in the thick puffs of condensation, dust and ash as the winds started pulling misty swirls of the cloud out against the moody blue sky. 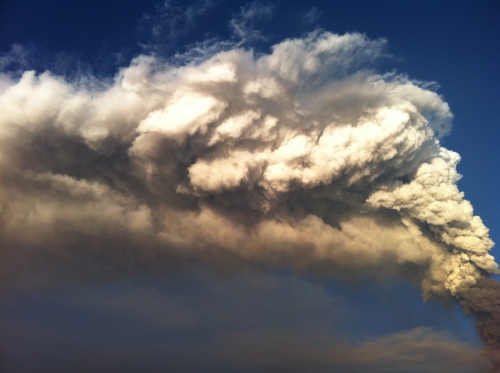