For those of you who don’ta speaka the Italian, this post is about the Valley of the Temples in Agrigento. Agrigento is an anciet city and the Greeks erected these temples between 510 and 430 B.C. (or so said our tour guide, Alessandra). The city at that time was called Akragas. The ruins are beautiful, inspiring and amazing. They are well preserved in a thoughtful park accompanied by sculpture, gorgeous vistas of the Mediterranean Sea, and bountiful olive and almond trees. Walking on grounds that have been used by civilizations for likely more than three thousand years elicited feelings of personal insignificance and infinite possibility.

The view from Valle dei Templi. Agrigento is immediately behind me, this is looking out to the Mediterranean Sea.

We ventured to Agrigento with a group organized by ITT (“Information Tours and Travel” – it is an arm of the MWR office (Morale Welfare and Recreation) here in Sigonella). About 45 of us piled onto a bus Sunday morning and headed west. As the sun gained strength and heat, we motored along the autostrada, stopping for a quickie bathroom break at the Autogrill. There were about five other tour buses there, which was probably because fewer Autogrills are open on Sundays. The stop probably lasted a little longer than expected and together with some traffic, we arrived a little behind schedule for the temple tour, and thus were a bit rushed as we went through the ruins. What follows is the abbreviated tour, I hope to return soon.

Sneaking a peek at Temple of Juno from its altar area, underneath an olive tree. Valle dei Templi, Agrigento.

While we’re thinking about olive trees, let me mention that we saw a 1,000-year-old olive tree in the park. 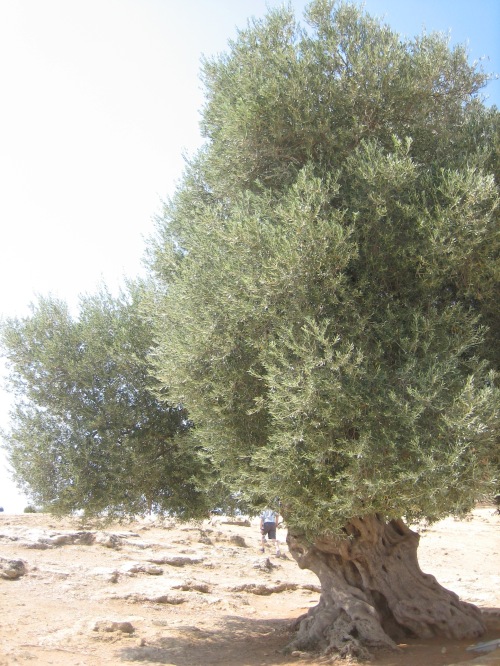 Beautiful almond trees punctuated the landscape as well. The almond trees flower in February and the valley is white with almond flowers. We may have to return here in February; hey there future visitors – make a note!

A close-up snapshot of the almond tree, can you spot the almond husks hanging on the branches? Valle dei Templi, Agrigento.

Now, here are photos of the main three temples that we visited, from highest elevation on the hillside: Temple of Juno (Giunone), Temple of Concordia, and Temple of Heracles. There is also a photo of a statue that was part of the Temple of Zeus, and a special shell I found along the way.

Look for the U-shape carved into the perpendicular rock in the back righthand corner that is perched on top of the columns. That was where the Greeks would hook the ropes used to lift and manuver the rocks. Dare I mention that a pulley system was used? Temple of Juno, Valle dei Templi, Agrigento.

Look in between the leftmost columns, toward the ground level of the temple, see the rocks that are reddish colored? That is evidence of the fires that ravaged this temple. The temples are all made of sandstone quarried from the hills of Agrigento and sandstone turns red when burned. Temple of Juno, Valle dei Templi, Agrigento. 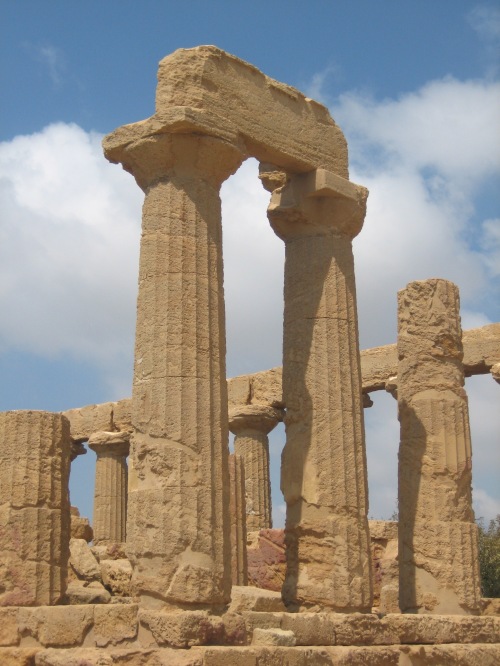 The sculpture is a piece by Igor Mitoraj, who is discussed below. Temple of Concordia, Valle dei Templi, Agrigento.

One of the most in tact Greek temples existing today. Temple of Concordia, Valle dei Templi, Agrigento. 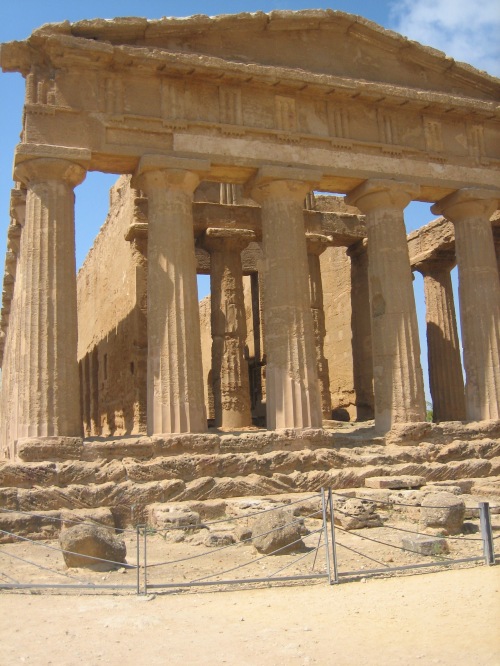 Moving things right along, we made our way to the Temple of Heracles. Alessandra gave us an explanation of the complex mythological indications and historical accounts that has led the curators to “be sure” that this temple was indeed dedicated to Heracles. Not being very familiar enough with the histories she referenced, just trust that she had me convinced.

It almost looks like this is a single column. Temple of Heracles, Valle dei Templi, Agrigento. 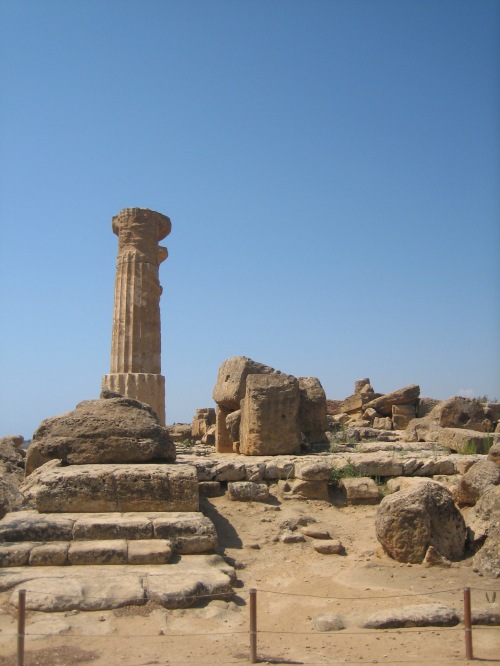 With a little shift, you can see the row of columns appear. Notice the square hole cut into the rock to the right of the columns, that is where the bronze fitting would have gone to link that piece to another piece of the column. Temple of Heracles, Valle dei Templi, Agrigento.

From the Temple of Heracles, we exited one section of the park, crossed what had been the main piazza of Akragas and walked to the separate entrance to view the Temple of Zeus. This temple was a massive stadium-like structure that had been built a little differently from the other ruins. Because of its massive size, relative proximity to the towns where subsequent civilizations settled, and abundance of building material, the Temple to Zeus has been almost completely destroyed over the years. The only remains are essentially the basement foundations, a few remanants of statues that were part of the structural supports, and part of the outer wall and altar area.

The picture here is a replica of a statue of a “giant” that was part of the structural supports, the support a column would serve. The Greeks built columns with separate rocks pieced together with bronze fittings. The piecemeal columns were more adept at withstanding damange from earthquakes. The statues display this concept as they were constructed in pieces. The other significance of these statues is that the remains that have been recovered show the Greeks featured the different races of the world in the physical features of the giants in statue. Likely, the Greeks depicted those civilizations that they had successfully conquered, though it reminded me of just how long globalization has been a very real concept, if not one as integrated as it is today.

Replica of one of the “giants” statues. Temple of Zeus, Valle dei Templi, Agrigento.

Statue of the Sister of Icarus, Valle dei Templi. Icarus’s sister is also a topic of an Auguste Rodin sculpture “Fall of Illusion: Sister of Icarus” and covered by the blog “a blind flaneur” in this post, and featured in a Talis Kimberly song, “Icarus’ Sister.”

Supposedly, Icarus used manmade (Dad-made by Daedalus) wings to make an escape and in his exuberance, he flew too close to the sun (or dunked into the sea, depending on the storyteller). Following his demise, his sister gathered up the wings, retrofitted them to her physique and was about to fly away when someone stopped her. Here, there is a man’s hand around the sister’s ankle, preventing her flight. (If anyone reading this has more details, please email me!) These sculptures are representative of Igor Mitoraj’s sculptures at Valley of the Temples. The Polish sculptor’s work is on display throughout the park and aimed to honor the Greek myths, allow room for creative interpretation, and mimic the incomplete status of the temples in the park. All of the sculptures are rough edged and merely parts of a concept, much like a broken piece of sculpture or pottery found on an archeological dig.

Speaking of archeological digs, I felt a bit archeologist-like when I spotted a shell in one of the stone stairways in the park. Okay, I don’t even know whether this stairway was rebuilt 30 or 300 years ago, so I know I’m not really an archeologist or anything near it. I was thrilled to notice the shell, nonetheless.

Growing up in Wisconsin, shells represented travel and imagination to me (for those of you who are unfamiliar, Wisconsin is “in the middle” – just north of Chicago, and hence, no oceans; no oceans = no ocean shells). There are fresh water shellfish to be sure, but the only “shellfish” I knew of growing up were crawdads! In many ways, my heart still swoons when I see shells in unexpected places, such as in the step, or when mowing the lawn or weeding the garden in Bremerton (okay, I should have seen that one coming, I just wasn’t accustomed to it).

Can you see the shell in the sun-dappled shadows? Stairway, Valle dei Templi, Agrigento. 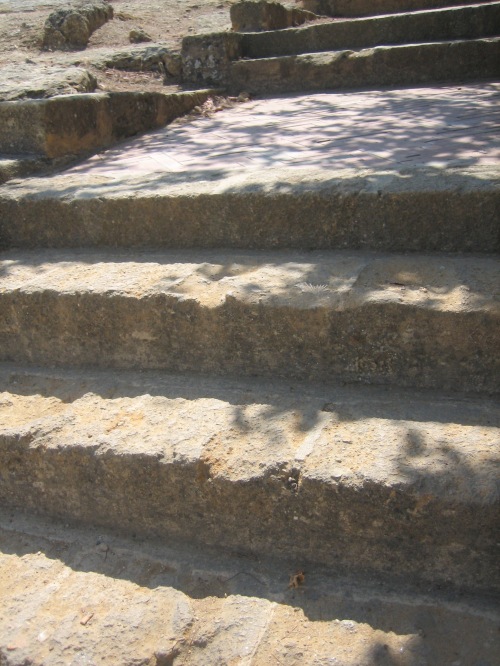 See where the infinite possibility feelings came from? It was at this point on the tour that the influence of intervening civilizations was really starting to hit home for me. Byzantines, Arabs, Normans, Spanish, and others passed through the same area and established significant civilized communities. Theses communities used the grounds of Akragas for tombs, buildings of worship, commercial enterprise, and as a stone quarry. It took a wide variety of caretakers over the centuries to recognize and protect what remained of Akragas and the Greek temples. Each player: priest, foreigner, businessman, had a different reason and method of preserving Akragas and the temples. The point is that they, like the Greeks who built the temples, saw an important vitality in structures. Alessandra described the Greeks who built these temples, she said that they believed in the immortality of the gods the temples honored. Thus, the Greeks built structures to last forever and then feasted as if they would die tomorrow. Infinite possibility and personal insignificance, concepts inextricably intertwined, the same back then as they are now.